Seeing the Big Picture in Our Big Freeze 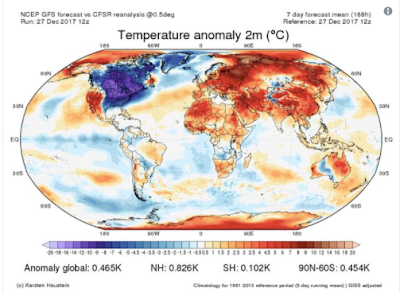 A map of global temperatures is very helpful in better understanding how our record-breaking cold fits into overall global warming. Red indicates parts of the world that are currently warmer than normal, with that blob of blue over North America showing that our comparative cold is an isolated event. To compensate for parochial perceptions of climate, news media need to be displaying these maps frequently.

There's another way in which our frigid temperatures, predicted to continue for the next week at least, could be an effect of overall warming. A climate scientist at Rutgers, Jennifer Francis, has been studying how the radically warming North Pole could be weakening the jet stream. As these high altitude winds slow, the jet stream begins to sag and stagnate. This in turn leads to the sorts of stalled weather patterns that contributed to the record breaking flooding in Houston this past summer. Presumably, this same "increase in persistent weather extremes" in the summer, a consequence of climate change, would hold true for the winter as well.

From what reading I've done, the jet stream functions like a belt, or an abdominal wall that rings the planet, flexible but strong enough to keep the arctic weather mostly contained to the north. The big freeze we are experiencing can be thought of as a giant hernia, in which that wall weakens, allowing arctic temperatures to spill southward over the U.S.