Shout Out to Princeton Womens' Soccer

A shout out to the Princeton University women's soccer team for some exciting play this fall and a deep run in the NCAA soccer tournament, reaching the quarter finals. They combined a tenacious defense with a potent, free-wheeling offense that won the Ivy League title and took some much larger schools in other leagues by surprise.

Though I seldom follow sports, the soccer team and its season pushed some buttons for me, having come from a small town in Wisconsin whose high school teams, orange and black bulldogs rather than tigers, played against larger schools and often won. What drew me to sports as a kid was the skill, teamwork, improvisation, and the exhilaration of running pell mell down a field. Women's soccer brings those qualities to the fore, leaving brute strength and body blows to other sports and other fans.

At some level, the women's soccer games serve as a salve in this political era. The games are honest--no phony writhing in pain like one finds in men's professional soccer. There's all that positive energy of players giving everything they've got to a shared goal. No room for laggards or selfish agendas. At the same time, the players are free to express their personalities on the field--each with a distinct style. With no time outs, the coach often out of earshot, the team must depend on its own wits and chemistry. The fluency of precise passing doesn't play out as static ball control, but always leads somewhere interesting, with near goals often as exciting as the goals themselves.

Soccer games at Princeton U. are free and open to all. Knowing no one in the stands, I'd engage in the action but also feel a solitude, a sense of having stepped out of my accustomed orbit. My youth in sports was eclipsed by an adulthood of music and environmental work, but even a native plant advocate can get drawn back to the action on that broad sward of green. Go Tigers!

Related post about soccer and climate change: Cheering For the World 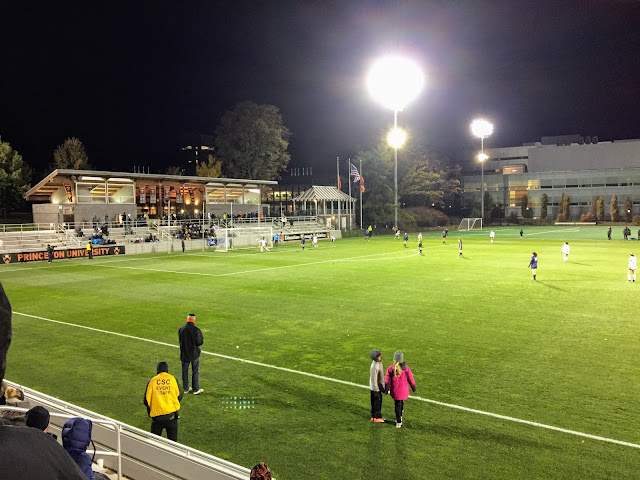