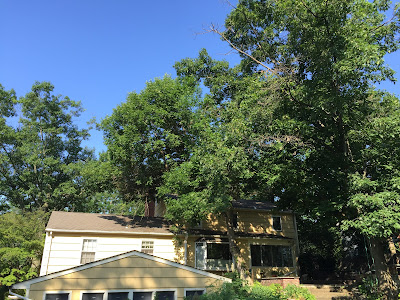 Our house stays cool deep into the morning thanks to two trees, both imperiled. The one on the left in the photo is an ash, which in its love of the sun has bent southward like a shielding hand over the roof. Though it has yet to show any symptoms, we almost certainly will lose it to the appetites of the Emerald Ash Borer. If its lopsided growth were to cause it to fall against the house in an ice storm, we've decided it would do little damage, like the giant elm on Murray Ave that simply tipped a few feet in Hurricane Sandy's fierce winds to rest softly against a house. And so we keep it, for now, feeling fortunate when we think of those who have to crank the A/C in houses or apartments unprotected from the sun.

The other tree, taller and to the right, is a red oak, planted by the builders and first residents of the house, the Dubas, who love oaks in part because their family name is derived from the Ukrainian word for oak. That tree, too, is threatened, by the introduced bacterial leaf scorch that causes increasing dieback in the upper limbs. 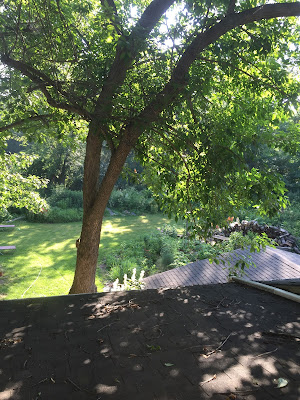 The ash's sheltering embrace is most evident when seen from the inside of the house.

These trees are on the east-north-east side of the house, where solar panels are not an option. Trees on the south and west sides of the house, however, stir ambivalence. The shade is appreciated, as is the additional cooling effect that comes from all the water being transpired through the leaves.

But the two trees shading the southwest side don't come close to the beneficial effect of solar panels, which not only would shade the roof like trees do, but also would generate energy that would otherwise come from fossil fuels. Trees pull carbon out of the air, until they give most of it back when they die and decompose. Even more important in the longterm is to not be adding more and more carbon to the above ground world as we combust coal, oil and natural gas. The more carbon being pumped or dug up from where it has been safely sequestered underground, the less likely it is that the plant world can ever pull enough out to sustain a livable planet.

If I had my druthers, I'd cut down the large trees on the south and west sides of the house, which also are suffering from dieback, and use their collected solar energy in our wood stove to heat the house in winter. I'd install solar panels from the opened sky, and replant our southwest exposure with smaller tree species that will still provide cooling but not shade the solar panels.

Some people view trees as an unalloyed good. Others view them as pests that keep making a mess. What I'd advocate for, and would wish to see better reflected in our shade tree ordinance and in the actions of homeowners, is a more complex view of trees that integrates the many ways a tree can contribute to or interfere with sustainability, depending on location, size, and species.
Posted by Steve Hiltner