There was a time when I believed that education could change the behavior of homeowners and landscape companies. I even wrote the Guide to Fall Leaf Management, years back while a member of the Princeton Environmental Commission. The brochure sings the praises of mulch mowing, leaf corrals, and incorporating leaves into the landscape. I'd like to think it helped some people view leaves as an opportunity rather than as a nuisance.

But since that time I've had enough experiences with homeowners and landscapers to convince me that very few are listening and even fewer are interested in changing their ways voluntarily. A yard is an extension of a homeowner's personality, so that asking them to change their approach to yardcare is akin to asking them to change their view of themselves, their culture, and of nature, and that stuff is pretty hardwired. People take their cues from their past, their neighbors, and what the town will let them get away with. That's a lot for a brochure to compete with. 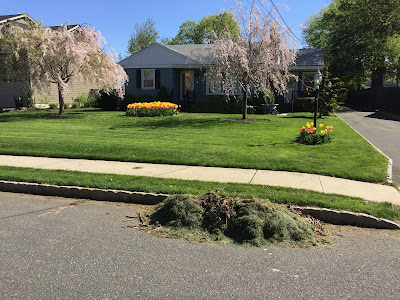 This photo speaks volumes about the dominant culture and the future of the world. First, there is a reduction of land to mere ornament--nature reduced to the role of a visual support for the house, seldom stepped on other than to mow. One of the sketches in my climate change theater is called Turf Therapy, featuring a suburban lawn who tells a therapist that she feels like a trophy wife, trapped in a co-dependent relationship with the narcissistic House. On a larger scale, nature plays the sacrificial, supporting role to meet the needs of the self-centered, extractive economy.

In this lawn and in nearly every other yard and grounds you could think of, there's also the need to simplify nature, to reduce its baffling complexity down to something less intimidating and more easily managed. We can't all have a deep knowledge of plants and plantcare, and even the professional landscape companies are little more than custodial operations. Though less extreme than in the photo, our yards reflect that.

In addition, it may seem counterproductive, self-defeating, to pile yardwaste in front of a tidied up front yard, but this juxtaposition is apparently jarring only for those of us who value public space. For those whose interest stops at the property line, this pile of grass clippings is as invisible as the fossil carbon emanating from our machines' exhaust pipes and chimneys.

Passing by, I complimented the owner on his lovely tulips and weeping cherries, and then politely explained to him and his landscaper that the town doesn't collect grass clippings. Later, I double checked and found that the town website says:


"The leaf and brush pickup does not include grass clippings. It is recommended they be mulched back into your yard. Do not leave them out for pickup." 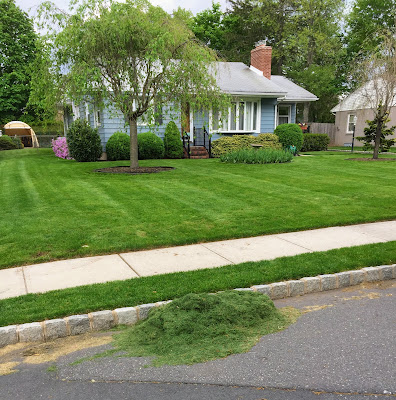 The owner smiled and said he'd remove them, which all seemed very logical and thoughtful until a week later, when another pile appeared. Perhaps a miscommunication with his landscaper? 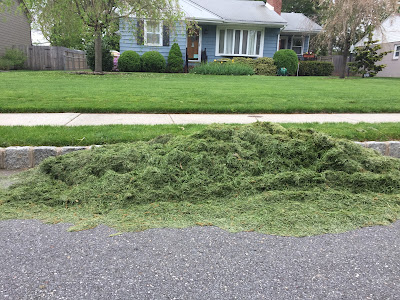 Now, imagine the environmentalist's predicament. Believing in the benefits of sustainable landscaping, the environmentalist carefully crafts a brochure to convince homeowners to change their wasteful ways. If only people would read the brochure, surely they'd be swayed to change their ways. But the simple, heedless act of piling grassclippings at the curb sends a more powerful message than any brochure ever could. Each passerby who sees the grassclippings is thinking, "Oh, maybe that's what I should do." 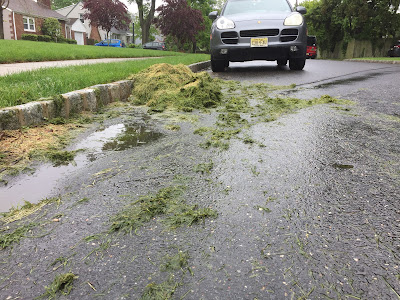 Meanwhile, the rains come and cars run over the pile, spreading its rapidly decaying, high nitrogen contents and washing nutrient pollution into the local waterway. The nutrients feed algal growth in the water, the subsequent decay of which depletes the oxygen available for fish to breathe. Such are the complex ways of nature, all taking place far from view until the fish go belly up in Carnegie Lake, not from this one pile of grassclippings but from the collective impacts of biological and chemical insult that we unthinkingly impose on the world around us. 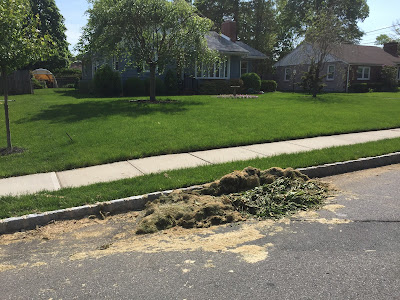 And imagine the town's predicament. If they scoop up the clippings on one of their collection days, they encourage the homeowner to continue violating the ordinance. But if the town stays true to its ordinance, the clippings then sit there for weeks, looking ugly and raising a stink if disturbed, given the anaerobic decomposition going on inside the dense pile.

A comic aside: I was walking my dog by the man's house sometime later, when the dog, being a dog, decided to pee on the grass extension between the sidewalk and the curb. The man, who was cutting down his spent tulips, waved us away, as if I were supposed to give my dog the bum rush, lest the pee impact the pristinity of the lawn. It's as if the lawn becomes more carpet than something alive, cut off from nature's cycling of nutrients. The disconnect between private and public, yard and the natural world beyond, is deeply entrenched, and I don't see how any educational intervention, no matter how thoughtful, will ever change that on its own.

It's not right for environmentalists to be burdened with the task of changing behavior. In essence, we are being punished with extra work while the malefactors blithely keep doing what they've always done. When, through policy change and enforcement, and through better options like containerization of yardwaste in compost carts, people are both required and encouraged to change their ways, that's when an informative brochure will help people adopt, and feel good about, a more ecological approach. 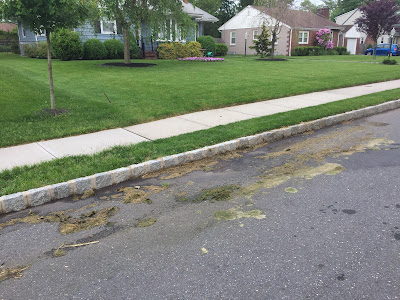 Update: After several weeks, the pile of grass clippings finally disappeared. Apparently the homeowner, who also runs a landscape company, gave up hope that the town would take them away. I doubt that he'll pile any more grassclippings at the curb. He changed his ways not because of education, but because the town made a rule and stuck with it.
Posted by Stephen Hiltner