Sunny weather returned to Princeton just long enough to grace Sustainable Princeton's Greenfest this past Saturday, May 11. This was a full scale festival that transformed the Shopping Center's partially sheltered courtyard with so much to learn and enjoy. It was a revelation to see the courtyard's potential as a gathering and learning space being fully utilized, seemingly for the first time. 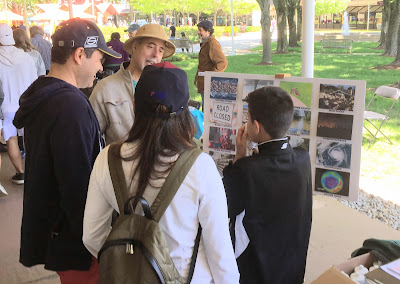 Though the focus of the festival was on solutions--bicycles, electric vehicles, stewardship--councilman David Cohen challenged passersby to find which disastrous events on his poster were not caused by climate change. Only a couple, as it turned out. 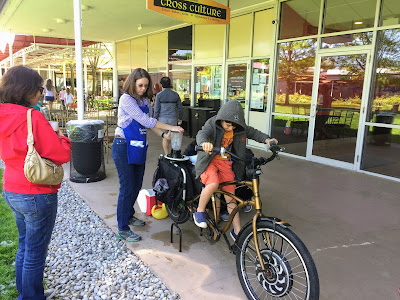 Sustainable Princeton's Jenny Ludmer, one of the chief organizers of the event, showed kids the power of the pedal by having them pedal a bike hooked up to a blender that ground up ice. 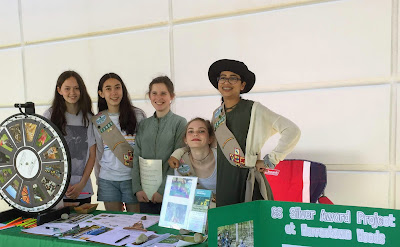 My favorite table was organized by girlscout Cadette Troop 72905, which has been so active in helping take care of Herrontown Woods and educating people about its natural and cultural history. 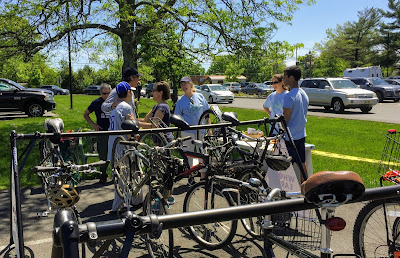 The bike theme began with parking your bike at some new racks purchased to provide Bike Valet service at local events. I had the pleasure of meeting a mother of middle schoolers named Lisa, the master mind behind the middle school recently installing additional bike racks. I had posted in the past about the shortage of bikeracks at the schools and on Nassau Street, but Lisa was able to work effectively through PTO, and even tracked down a good deal on the racks, to ultimately make it happen. 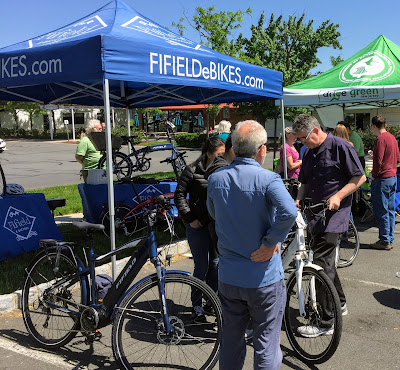 Fest-goers could testdrive electric vehicles of various sorts. A Boston-based electric bike company looking to expand into New Jersey had some very nice electric bikes in the $1-2,000 range. First time I tried one, a few years ago, it felt like cheating to have all that power boost under your feet. The owner said he doesn't hear that said much anymore. Electric is a way to get people back on their bikes. Batteries and electric power are the only way to shrink our sprawled communities back down to a size where we can get around without feeling dependent on carbon fuels. If suburban sprawl has made us feel physically helpless, then turn us into avatars with battery technology. 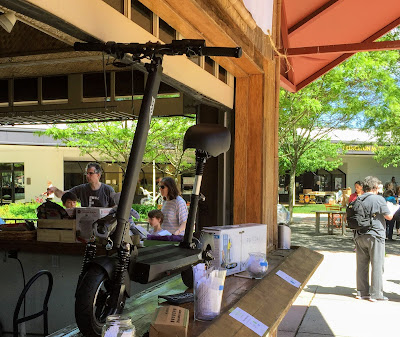 One of the raffle prizes was an electric scooter--another awesome enabler of transport. 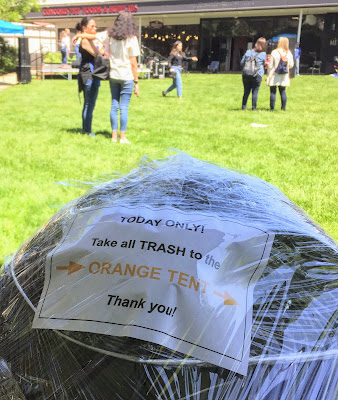 Trash cans were muzzled for the event, with all disposables to be taken to a special tent for separation into recyclables and landfillables.

The courtyard's "green"was dotted with people listening to some fine vocal and instrumental groups. I did a ten minute stint on the stage as Climate Cabaret, taking on the character of CO2, and contrasting sport's celebration of can-do collective action with climate-denial's deep pessimism about taking collective action to slow climate change. I also sought to make up for a global scarcity of environmental jokes. For example:

Question: How many environmentalists does it take to screw in a light bulb?

Answer: Two--one to screw it in, and another to keep turning it off. 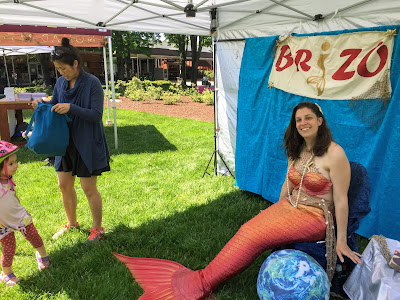 Brizo the mermaid was holding court in her own tent, talking to kids about that magical substance we call water. 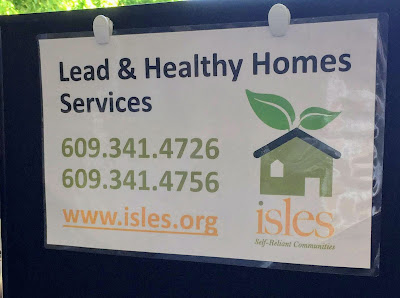 Sustaining health was another theme at a couple tables, with Isles of Trenton on hand, and a nurse to take the blood pressure of passersby and discuss such topics as Lyme.

This solar suitcase comes with an unfoldable solar array to sustain a house through a power outage, but I ran out of time to find out more. Learning about that will require another Greenfest. 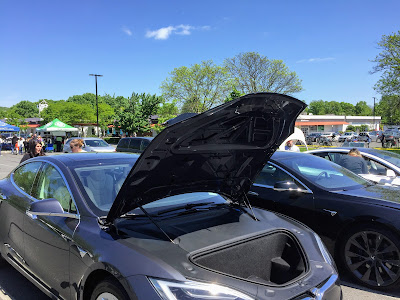 Each day, politically and economically tethered to our roles as dystopia's lackeys, we spew more fossil carbon into the air, unintentionally but knowingly and legally sacrificing the future for the present. A livable  future has been kept bound and gagged by a political opposition warped by pessimism and cowardice.

At Greenfest, all the solutions were on display. It was a chance to once again believe in the future. That old saying, "the sky's the limit," has in recent decades taken on two opposite meanings--one of promise, another of portent. Sustainable Princeton's fabulous festival transformed Princeton Shopping Center for an afternoon. Now, it's a matter of permanently transforming Princeton, of realizing promise, for the sake of the future.
Posted by Stephen Hiltner

Great summary of the event Steve! Thanks for highlighting all of the efforts of so many of our partners that contributed to an excellent opportunity for all community members to learn more about sustainable living.

Thanks for the coverage Steve! It's high praise to get a thumbs up from PrincetonPrimer! And yes, let the transformation begin...