Why is Princeton not covering its homes with solar panels? There's always an excuse. The roof may face the wrong direction, or it's shaded by trees, or the shingles are too old, or the owners are just there for a few years and see solar panels as something longterm. Meanwhile, our houses remain part of the climate problem when they could be part of the solution. Each person's decision seems minor, while the collective impact threatens our future. Solar is essentially free now, but the lack of a strong community call to action has made it hard for most of us to get beyond excuses. 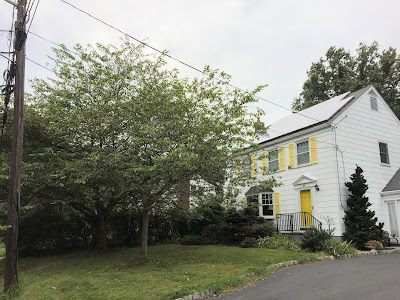 These three photos--taken in different directions from the same spot--tell a story indicative of our curious response to climate change's urgency. The first shows an ideal integration of trees and solar panels. The next two show how investment in the rest of the neighborhood is shunning solar in favor of additional investment in fossil fuel delivery.

The first photo shows the perfect way to combine trees and solar panels to give a house optimal cooling and energy production. The house faces south, so it has the perfect orientation for panels on the roof. But how about those trees in front? Well, they are a kind of tree that doesn't get very high--some sort of crab apple or ornamental cherry perhaps, the kind that stay low or can easily be trimmed back to keep them from shading the panels. Though not as large as an oak or maple, they nonetheless are providing the many benefits of a tree. They are evaporating water through their leaves, which cools the air around them, and their roots and branches are sequestering carbon they take in from the air. Many native tree species would work well in this niche: redbud, flowering dogwood, hawthorn, red buckeye, musclewood, pawpaw.

Though the trees aren't high enough to shade the roof, the solar panels are providing a complete and effective shading, while also generating renewable electricity. Smaller trees are safer than big ones around a house, and cheaper to remove if they need to be taken down and replaced. So there's a lot to like about this setup. 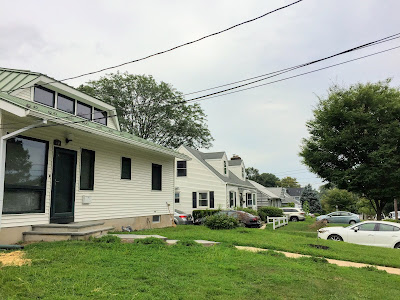 Meanwhile, look down the street and you see a long line of houses also perfectly oriented, and without any trees getting in the way. Perhaps because I grew up on WWII movies, they look to me like battleship row--structures that could be defending our country by generating renewable energy. And yet they stand idle. The first one there, with the metal roof, was reportedly designed with solar panels in mind, yet they were never installed.

Solar panels on a roof are one way of saying the future matters, that we need as a people to become producers as well as consumers. In economics, sucking fossil fuels from the ground is called "production," but it's not. It's extraction. It gives us present comfort and mobility, but takes from the earth and takes from our future. America will truly start "making stuff again" when our houses begin producing as much energy as they consume. 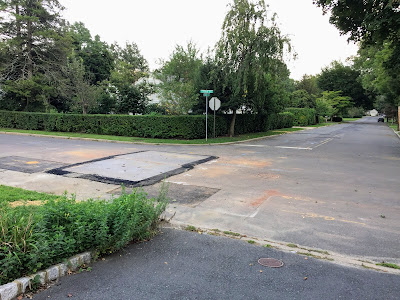 That big metal plate in the street in this third photo shows that not only are most houses not producing energy, but the infrastructure for natural gas delivery is being updated and improved. PSEG is installing higher pressure lines that, according to one of the workers, will prevent moisture from infiltrating. PSEG presents this nearly $2 billion investment as good news, emphasizing that old, potentially leaky pipes are being replaced. But the NJ Sierra Club came out against it. Most of the money appears to be going to expanding fossil fuel distribution at a time when radical reductions are needed.

People emulate their neighbors. If enough people get solar panels installed, others will think it's the thing to do. Trees and solar together, like that first house--an obvious solution remains the exception rather than the rule.