How to Reduce Princeton's Pollution of Local Waterways 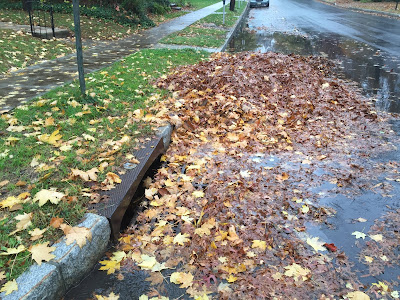 It's been heartening to see Sustainable Princeton alerting residents to the dangers posed to local waterways by the common practice of tossing loose leaves and other organic matter into the streets. Yardwaste often sits for weeks in the street, decomposing and releasing nutrients into stormdrains connected to Carnegie Lake. Three SP mass emails have pointed out how the nutrients in leaves contribute to algae blooms. Nutrient runoff also reduces the dissolved oxygen aquatic life needs to survive.

Many people probably think that by putting leaves on the streets, they are contributing material that will laudably be turned into fine compost at the ecological center. Though it's true that the composting center makes fine compost, there are some environmental downsides. Fossil fuels are burned to collect the leaves, and even the industrial scale composting process is fuel-intensive. Exporting organic matter makes one's soil less absorbent of rainfall, adding to downstream flooding. In addition, the combined collection of leaves and brush from Princeton and Lawrenceville has overwhelmed the 5 acre composting center's capacity.

It's easy for most residents to avoid putting leaves out in the street, by using various methods described on SP's Sustainable Landscaping webpage, yet these "leave the leaves" strategies are unlikely to be widely adopted, for a host of reasons.

While Sustainable Princeton is calling on residents to utilize their leaves on their properties, Princeton's current collection policy has had the unfortunate effect of encouraging unlimited purging of organic matter from private properties. Rules described on the town website, designed to abide by state laws limiting organic pollution in the streets, have proven difficult to enforce. The result is that residents and their landscapers throw leaves and other yard residue out into the streets without regard to complex collection schedules. This highly visible behavior, often in violation of state law and local ordinance, is then emulated by neighbors, until the least environmentally friendly behavior becomes the norm. No amount of education can overcome town practices that lead to unlimited purging. 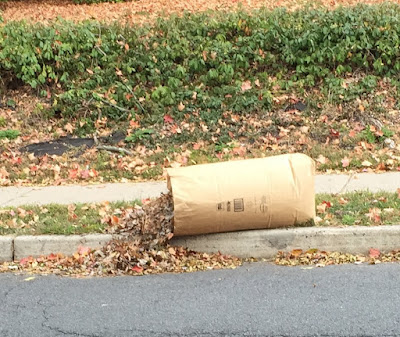 While investing heavily in loose pickups, the Princeton Public Works Department has shown little interest in offering residents better options for containerizing leaves. The only option currently is to squeeze the leaves into single use yardwaste bags. Leaf piles are mostly air, and a surprising quantity of leaves can be compressed into the paper bags, but they are an imperfect means of containerization. The bags get wet in the rain, are unstable and difficult to drag to the curb. 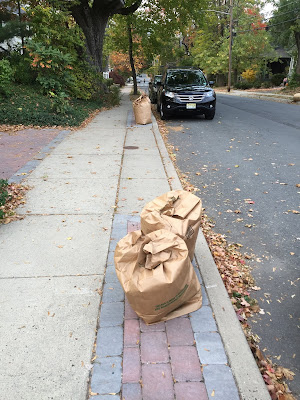 In addition, the town only collects bagged yardwaste for 17 weeks each year. During the large gap in service during the summer, the streetscape is adorned with the huddled masses of uncollected leaf bags that must wait until October for collection to resume. The bags also hide their contents, which may include forbidden materials like soil and rocks. 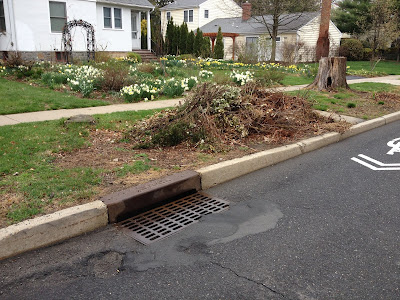 There is also a disconnect in people's perceptions, in which residents seem unaware that the pile of yardwaste they place next to or in the street might spoil the curb appeal of an otherwise well-groomed yard. Residents on busy streets often place their loose yardwaste on the extension, which then kills the grass, further marring the Princeton streetscape.

Since Princetonians pay high taxes and yardwaste collection is one of the most visible services provided in return, the only solution I know of is to begin offering residents a better option for containing the yardwaste. For a minimal investment, the town could augment its current bagged leaf collection by providing compost carts of the sort used widely elsewhere in the country. These have large capacity, covers and wheels. Distributed to interested residents, for a onetime fee or for free, compost carts can containerize the majority of leaves and other yardwaste currently being tossed loose in the streets throughout spring and summer. In combination with techniques like mulch mowing that reduce the quantity of leaves that might otherwise be piled in the street, compost carts can play an important role in the fall season as well.

Collection of containerized leaves in compost carts in bags could either be increased to weekly through most of the year, or the 17 current pickups could be made every other week rather than weekly.

With better containerization options, achieved with minimal investment by the town, public works officials will have more reason to expect residents to abide by local and state law, since residents can begin using compost carts to store their yardwaste until pickup day, rather than making illegal piles in the street. Town streets will become more attractive, less hazardous for bicyclists, and less polluting of local waterways. Ultimately, the town may be able to reduce the expensive loose collections as containerization provides more frequent and consistent service to residents.

In addition, compost carts will enhance the capacity of collection crews to enforce regulations. The carts reveal their contents when emptied into the truck, so that any unallowed materials can be seen, and a notice of violation easily placed on the cart. If carts have scannable identification codes, then notices of violation can be sent electronically by email. Currently, if residents put banned materials loose in the street, like grass clippings, the only practical option for enforcement is to leave the banned materials uncollected, to continue rotting and releasing even more nutrients into local waterways.

Past attempts to make compost carts available to residents have been stymied by a tendency of decision-makers to be quickly swayed by objections, whether valid or not. The compost carts are improbably characterized as being both too large for residents to store and too small to hold sufficient amounts of yardwaste. One official questioned the durability of the carts. Though it's useful to vet any new service, there needs to be a sympathetic entity willing to vet the objections as well, keeping in mind the many benefits. Why, we must ask, would compost carts not work in NJ when they are widely used elsewhere in the country? 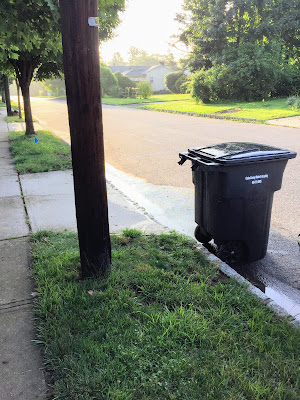 Most importantly, compost carts will be an educational tool to shift habits. Standing on the curb on collection day, one day a week, a compost cart provides a strong visual cue to neighbors that containerization is the behavior to emulate.
Posted by Stephen Hiltner