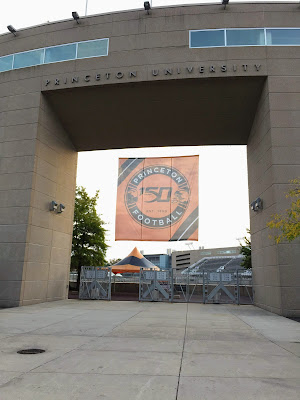 People celebrate Princeton for many things. Computers had some of their beginnings here, as did football apparently, which is now celebrating its 150th anniversary at the Princeton University stadium.

I wish that, for this grand occasion, they might have sprung for some new recycling containers to adorn the stadium's fine interior. Instead, the stainless steel containers that were dysfunctional ten years ago are even moreso now. It's more accurate to call them anti-recycling containers. 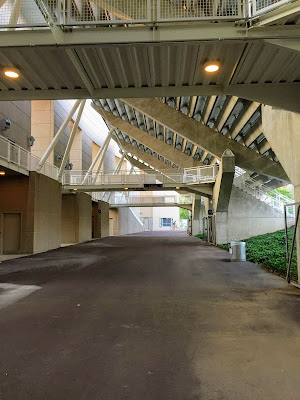 Back when I was trying to improve recycling, I devoted a whole blog to critiquing public recycling containers, so few of which are well designed. Walk down the stadium's interior corridors--a nice sort of indoor/outdoor experience--and you'll see some of the most confusing labeling imaginable. 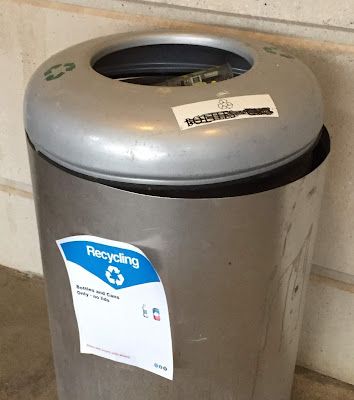 This one says "recycling", but the "bottles-cans" label is crossed out. 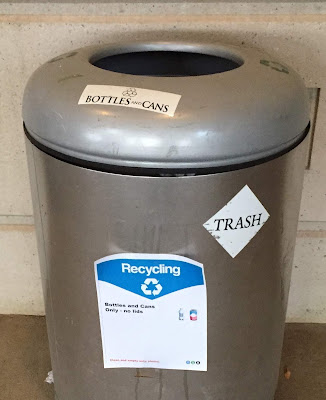 Two of this one's labels suggest recycling, but the third label says "trash." Does one go with the majority?

There are two basic rules for successful recycling: Pair up the trash and recyclables containers, because people won't take the time to go searching for the right container. And create a clear visual distinction between the two containers. Otherwise, people throw stuff wherever.

Here's a particularly helpful post from more than ten years ago that describes the recycling situation at Jadwin Gym, and how it could be easily and inexpensively improved. It was written back when I was contacting Princeton University's athletic department, wanting to help them improve their stadium recycling. We made some progress, but in the end, the lack of motivation for maintenance staff ultimately undoes any improvements initiated from above. 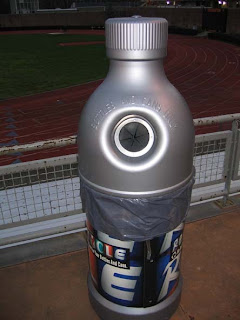 A better design for a recycling container is this one, in the minority at the stadium, shaped like the bottles you're supposed to put in it. 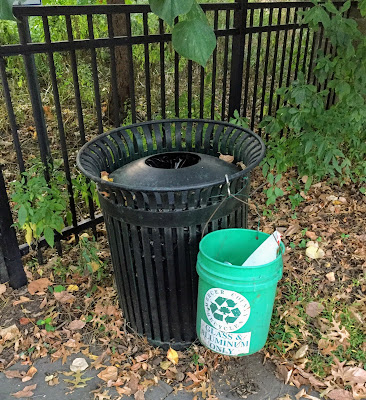 Another good design has been used in Princeton's parks for many years. It won't win awards for beauty, but actually works. The trash and recycling receptacles are paired and of contrasting appearance. It isn't expensive, and it really isn't hard.
Posted by Stephen Hiltner