Hidden behind the pandemic's grievous toll has been something of a flip side, a reawakening amidst the sorrow, what my friend Ron described to me as "a glimpse of a kind of beautiful world." He went on to explain:


"With humanity on pause, you can sense everywhere nature's resurgence - and it's all across the globe. It's as though the entire planet is heaving a great sigh of relief. Clear skies, and quiet; Robins can hear worms underground again. But even on the social plane, there's a sense in which people are rediscovering the pleasures of strolling, of encountering one another - even at the required distance - without car-bubbles and speed sealing them off. Have you noticed the passeggiata that has been taking place in Princeton's streets lately, in the early evening?" 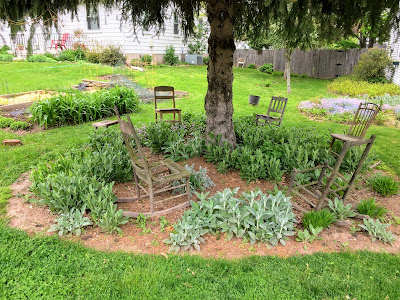 "Passeggiata"--I had to look it up. In other words, Princeton's streets, largely freed of cars in the evening, are becoming the shared public space they always had the potential to be. Most front yards are meant to be experienced with "car-bubbles and speed," that is, rapidly if at all. Nothing much more than turf and some static shrubs.

A few yards, though, reward slower passage. A recent leisurely bike ride up Ewing Street was rewarded with these scenes from people's front yards: a cautious congregation of old chairs social distancing, 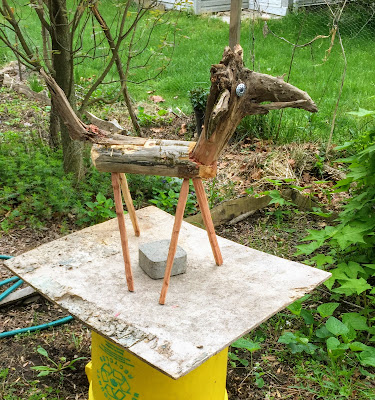 a wooden pony trying out its new legs, 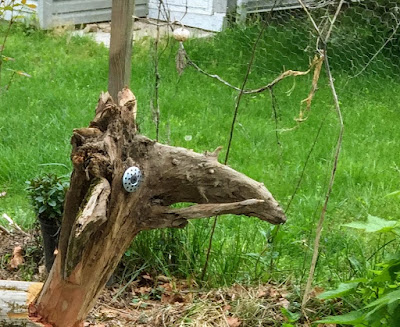 its head fashioned from a serendipitously shaped piece of red cedar with ears, a mane, and a mouth. 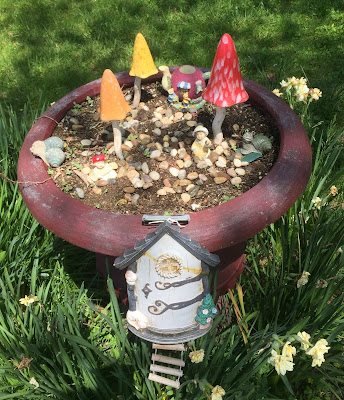 A repurposed birdbath provide fairies with a spot to shelter in place. The ladder is a practical touch. How else would the fairies be able to take part in Princeton's passaggiata every evening? 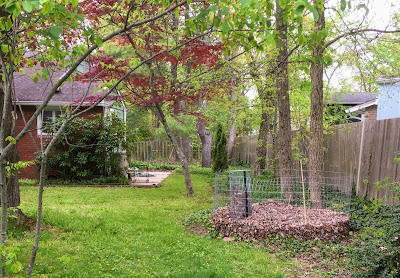 That's a Wishing (the earth) Well on the right--a circle of fencing with an inner column for composting food scraps, surrounded by a leaf corral. It's designed to hold and separately compost lots of leaves and food scraps. No odor, and no work other than retrieving the compost every autumn before new leaves fall.

All of these front yard examples involve reuse--making something positive out of what would otherwise be viewed as a negative. Like finding some pleasure in an evening stroll amidst the tragedy of a pandemic. Posting about this on facebook, it occurred that the slow food concept could be extended to "slow yards" that are best experienced at a slower pace.
Posted by Steve Hiltner

Email ThisBlogThis!Share to TwitterShare to FacebookShare to Pinterest
Labels: reuse

Lovely post, Steve. V sees his creature as imaginary, though as with all art the interpreter has license!