The Relevance of Tallship Training in the 21st Century

Memorial Day is a good day to tell of a most unexpected visitor to Philly this past September. The literature calls it "America's Tallship", the Barque Eagle, and shows it plying the open seas in full sail. 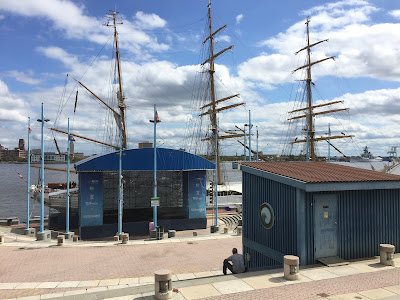 This is what it looked like, docked behind the performance stage at Penns Landing. Specs show the three masts to each be 15 stories high, on a ship 300 feet long. Nice relict from a bygone era, it seemed, 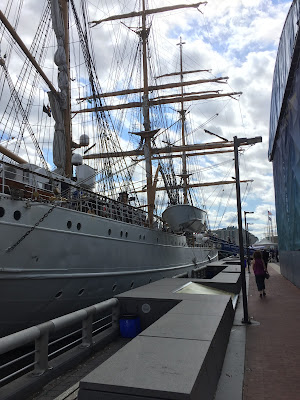 but as we approached, a group of young sailors in military uniform greeted us and invited us on board to have a look around. Their look of happiness and pride seemed too genuine to be a product of disciplined show. And, yes, the ship actually does sail, touring the world, with a mission of training leaders and spreading goodwill.


Why would the Coast Guard train its future officers on a sailing ship built in 1936? Their website explains:

"Because the ways of old still have much to teach. The conditions and situations that you face under sail can’t be replicated either in a classroom or aboard today's modern ships.

"On board Eagle, cadets find themselves suddenly out of their element. Totally dependent on wind, waves and currents, they quickly learn how these forces of nature affect a vessel. They become skilled in ship-handling, decision-making and meeting unexpected challenges. They learn the importance of crew members working together to handle the ship safely." 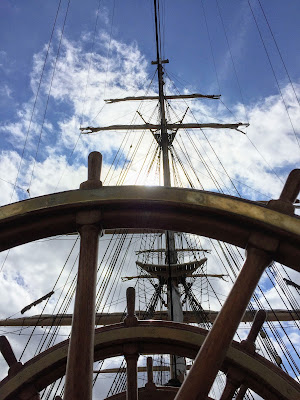 With 23 sails and 6 miles of rigging, the ship requires all 55 crew members working in harmony just to come about. Sailing teaches a deep understanding of and respect for the forces of nature and the power of collective action. These are the profound lessons Americans once grew up understanding as part of life, back when we partnered with nature, before we turned most work over to machines, and grew so powerful and isolated from nature that we thought we could dominate and ignore it. Even farmers far from the sea still needed to respect the forces of nature, and bring many hands to the task of raising a barn.

In a sense, the pandemic is reteaching forgotten lessons about respecting the forces of nature and the power of collective action. It's also broadening our understanding of what it means to serve and defend our country. We've learned the hard way that it's not enough to pay a military or build a wall, then pay periodic solemn respect for heroes while the rest of us do our own thing as we please. We're in this together, military and civilians, and will be saved or harmed by the collective sum of our individual actions.

There are a few quirks and ironies to this iron-hulled tallship that should be pointed out. It was built by the Nazis and originally used by them to train sailors, prior to being confiscated by the U.S. as war reparations after WWII. And even though it has half an acre of sails, it still is fitted with a diesel engine that provides about half the power.

Still, I stepped off the Barque Eagle with a deepened pride and sense of connection to those in uniform who on this ship step back into a previous era to learn lessons that continue to gain in relevance as time passes and numbers swell.
Posted by Steve Hiltner