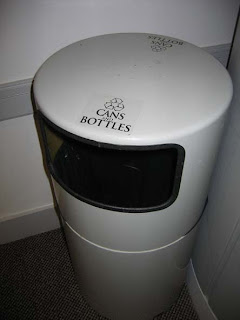 One day, after a lunchtime talk at Princeton University on global warming, students, faculty and some locals were milling around, finishing their lunch while avidly discussing how to save the world. As they left, they were far too distracted by their lofty thoughts to notice they were stuffing their paper plates in a recycling container for cans and bottles. A container labeled for trash was just outside the door, but nobody could be bothered to seek it out.

And so it goes with much of human life. Our big brains are more taken with big ideas than the nitty gritty, small acts that cumulatively determine our fate on this planet.

It doesn't help that these containers are poorly designed. The big opening in the recycling container is begging for refuse, and there is no visual cue beyond the subtle labeling to distinguish it from the trash can (2nd photo). If environmentalists don't bother to read the labeling, who will?

The custodians told me that if there's any contamination in the recyclables, they throw the whole batch in the trash. 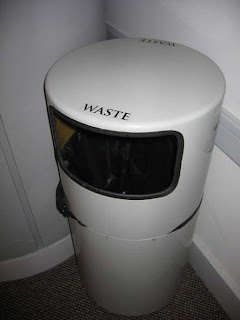