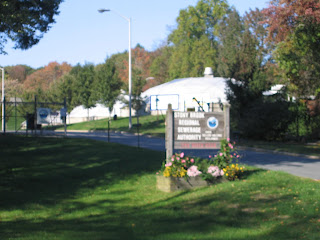 Fortunately, the Stony Brook Regional Sewerage Authority, as it's properly called, was able to get 9000 gallons of fuel oil per day trucked in to run backup generators--not easy when trees were blocking roads and fuel oil was scarce. Also fortuitous, the hurricane brought the Princeton area relatively little rainfall with the high winds. Heavy rains would have seeped via groundwater into aging sewers, adding substantially to the quantities of wastewater the plant had to process while it was running on backup power.

What was most striking for me, in talking to the plant manager after the hurricane, and previously to the executive director, is the millions of dollars of energy required to deal with the wastewater that drains silently from our homes, businesses and institutions into the great underground labyrinth of pipes leading eventually to the River Road plant. My scribbled notes are not the last word on the subject, but here's what I have: