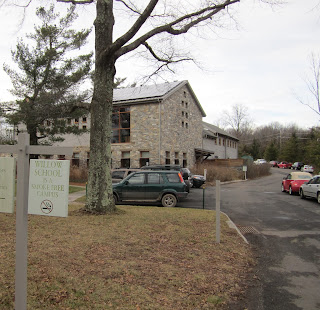 Every once in awhile, one happens upon a place where the world makes sense.  This scene at the Willow School in Gladstone, NJ may not look unusual, but underneath the pavement is a 30,000 gallon cistern that catches runoff from the building's roof. The water is treated on-site and then put to use for most everything but drinking. The building was built, in the jargon of environmentally enlightened design, to the LEED platinum standard, another building is LEED gold.

I first learned of the Willow School through a presentation hosted by OASIS (Organizing Action on Sustainability In Schools) at the Princeton Public Library, and recently asked if I could stop by when I was up that way.

With kids from pre-school through the 8th grade, their mission statement speaks of "the wonder of the natural world", respect, independent thinking, creativity, responsibility, and integrity--words that take on meaning in the landscape as well as the classroom. The first thing my tour guide, science teacher Michael Chodroff, pointed out was that their driveways have minimal curbing, so that runoff can be absorbed by the landscaping rather than piped straight into the local stream. 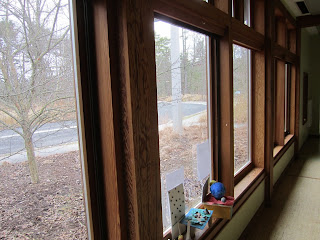 The south-facing windows let abundant light and warmth in when the sun is angled low in the winter. Much of the woodwork was salvaged--the wood framing these windows came from a pickle factory that was being torn down. 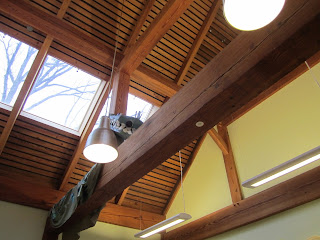 Fifteen years ago, I heard a speaker on LEED school design tell of how natural light from a row of south-facing windows high up in the ceiling has been shown to substantially improve student performance. Here, finally, I saw that knowledge applied. 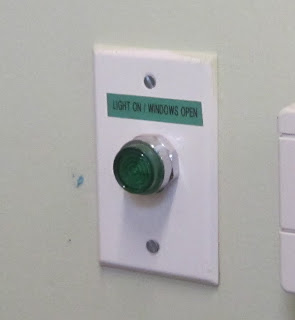 If you've ever wondered why your house isn't smart enough to tell you when the air outside has reached a comfortable temperature so that you can open the windows and get some fresh air, well, here's a device that senses outside temperature and gives kids "the green light" to open the classroom windows. 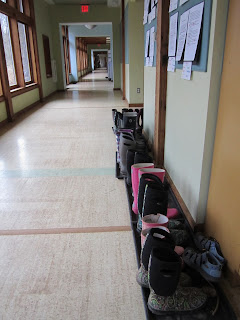 In the hallway, there was a very impressive row of boots that suggested the kids were ready for any kind of weather. Turns out they play outside undaunted by what weather hands them. 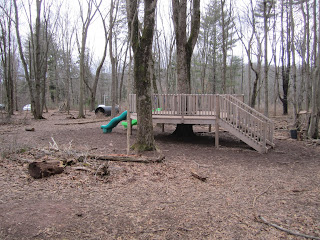 Instead of elaborate play equipment, the kids play in what is essentially a woodland, 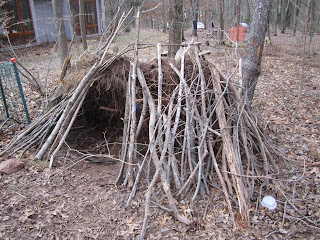 using their imaginations and the materials at hand. The resourcefulness and problem-solving abilities developed on the playground have beneficial effects in the classroom. Here, the root ball from a tree blown over by Hurricane Sandy became the side of a house. On the playground as in the buildings, local materials are gathered and put to new uses. 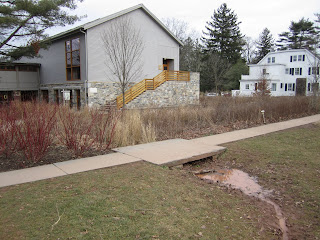 Runoff from a field, rather than being directed to the nearest stormdrain, is put to use feeding a wet meadow of native wildflowers that surrounds one of the buildings. On rainy days, the kids can track and play with the water's flow. 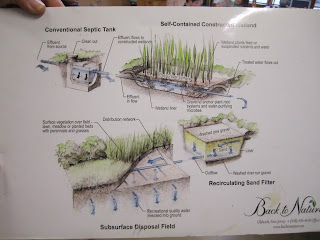 The school even takes responsibility for cleaning its own wastewater, with a septic tank followed by a wetland, after which the water enters a drainfield, seeps into the ground, 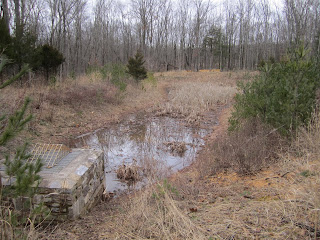 and emerges cleansed and filtered in a pond that is used for study. Contrary to the energy-intensive process most of our wastewater undergoes at a distant plant, this process requires no energy inputs and creates habitat. 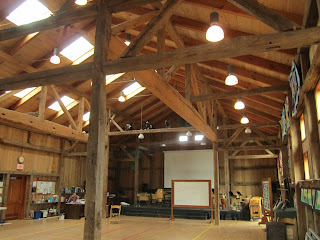 You might notice different colored beams in this cafeteria/gym/performance space. They got a call from a developer in Pennsylvania who had a barn he had to be rid of in a week's time. They salvaged the beams and re-installed them here.

The building is as most of us are--a mix of old and new and everywhere we've been. 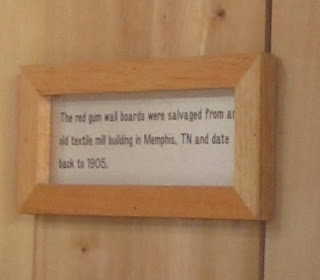 Signs explain that the redgum wall boards came from a 1905 textile mill building in Memphis, TN. The heartwood pine roof rafters had an earlier career as part of an 1890 Seth Thomas Clock factory in Connecticut. Beech ceiling boards had been part of a tobacco factory in Kentucky. 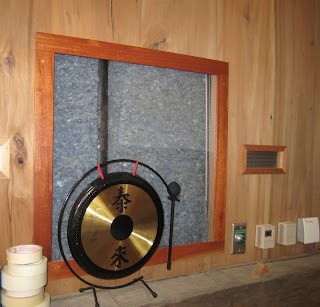 The building's insulation, as this cutaway shows, is recycled denim. Not sure about the gong, but the music program uses the Carl Orff method. 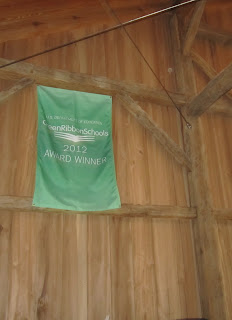 Up in a spot in the rafters that might ordinarily boast past sports championships, a Green Ribbon Schools banner flies. 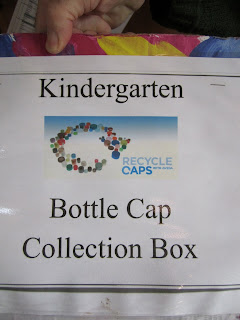 Kindergartners can get into the swing of repurposing by collecting bottletops to send to Aveda. 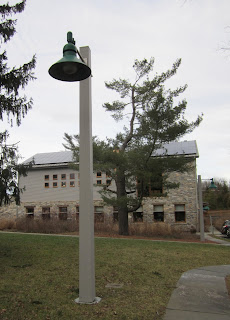 Even the lamposts have the look of having been somewhere else, and something else, in a previous life.

The next building to rise will be a "living building", defined as a building that generates more energy than it uses. The founder, Mark Biedron, took a moment from his work on the design to tell me that the school aims to develop a sense of place. When they first obtained the property from Pfizer, they studied its geology, hydrology and history back to the glaciers and beyond. Some themes emerged, e.g. the land is between two watersheds, and on the edge of the last glaciers' extent, that are used in the classroom to help kids understand the meaning of where they are.

The Willow School, then, finds use and advantage in many things that are elsewhere shunned--sunlight, runoff, wastewater, old building materials. Even suboptimal weather doesn't discourage the kids from outdoor play, as they use nature's discards to fashion lean-to's.

In a world not always welcoming of dreams, here one has been realized, and is lived every day. May its students carry this most sensible of dreams far and wide.
Posted by Steve Hiltner

Well done, Steve
A fine profile of a an innovative place.