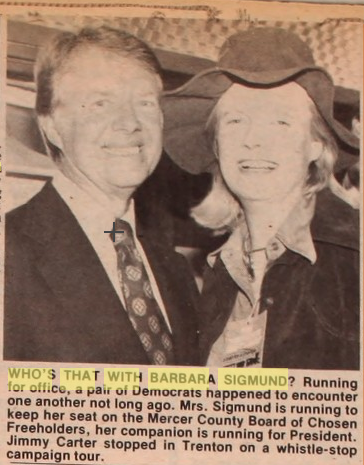 Digging through old Princeton newspapers (online) for info about Oswald Veblen, I found this from October 7, 1976. Thirty eight years and an extra 67 ppm of CO2 later, Jimmy Carter will speak at 2pm tomorrow, Wednesday, Dec. 3, at the Princeton University Chapel.

Barbara Boggs Sigmund was, among other things, mayor of Princeton from 1983-1990. Her sister, Cokie Roberts, is officially Mary Martha Corinne Morrison Claiborne Roberts (née Boggs), which suggests that Barbara had some more names in there.

While we're at it, I'll mention that the Barbara Sigmund memorial garden is located at Chestnut and Hamilton Ave, and is in need of a knowledgeable caretaker.
Posted by Steve Hiltner