The Logic of Banning Grass Clippings From the Streets 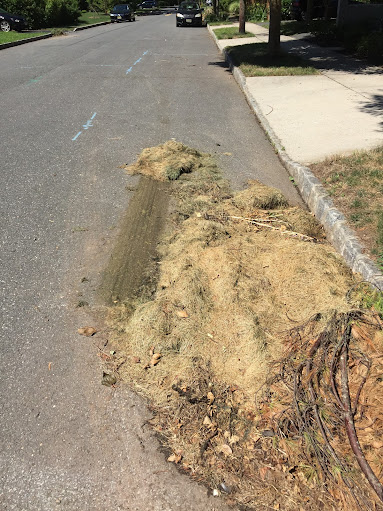 T
There's a law against placing grass clippings in the street. There are multiple reasons for this. Grass clippings are high in nitrogen, which stimulates algae growth in local waterways. As grass clippings decompose at the curb, they release the nitrogen, which then gets washed into streams as runoff from the streets, causing nutrient pollution.
Grass clippings also are very dense, which means air can't penetrate into a pile of them, which means that the decomposition goes anaerobic, encouraging bacteria that release noxious odors. When a pile of grass clippings that's been sitting awhile gets run over by a car, it releases those foul odors into the neighborhood.
A pile of grass clippings is ugly and mars the appearance of any property it is piled in front of, though psychologically this doesn't seem to register for most homeowners. As soon as the grass clippings are successfully purged from the property, they are someone else's problem and cease in some way to exist.
The last reason it is unlawful to put them in the street is that grass clippings can easily be left on the lawn, to quickly drop down between the new grass blades and return their fertility to the soil.
Posted by Steve Hiltner