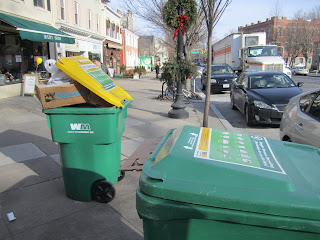 Wednesday must be recycling day in the business district along Nassau Street. 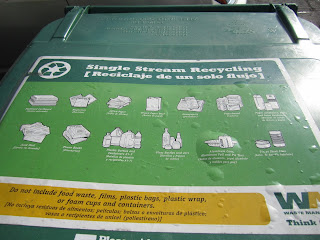 The rollout bins speak their desires on their lids--feed me papers, plastics, cans, but no styrofoam. Toddlers could come with such labeling, perhaps on their foreheads, describing all the things they will and will not eat. It would have made things much easier. 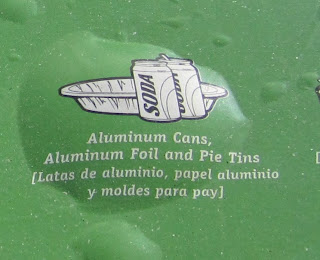 As the pictures show, downtown merchants can recycle a number of things that Princeton residents have been told not to include in curbside bins--aluminum foil and pie tins, 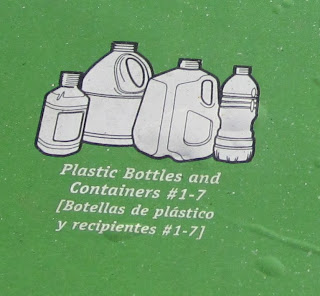 and plastics #3-7. All of my considerable research on the subject indicates that recycling these items is now standard practice, and that the hauler and sorting plant for Princeton's curbside recyclables accept these items and consistently have markets for them. And yet municipal and county recycling staff have remained adamantly opposed to adding these items to the list.

The county, which administers Princeton's curbside recycling service, says it wants the hauler and sorting facility to first "guarantee" that the additional items will be recycled. But that is logistically impossible, since it would mean tracking, to their eventual destinations, all of our recyclables, 60% of which are said to travel overseas to whomever is the highest bidder.

Back when the kids were young, if they rejected one food I'd try another. But when the world seems to be rejecting common sense, I tend to keep feeding it spoonfuls in the persistent belief that it will eventually change its mind.
Posted by Steve Hiltner