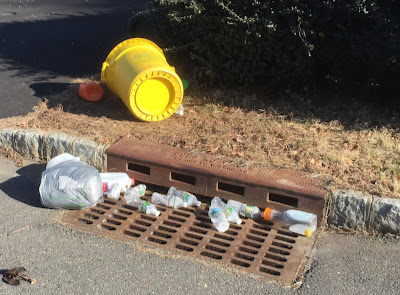 For anyone who has lived outside the Princeton bubble, the approach to recycling collection here can seem odd. Other towns and cities I've lived in or visited have long since switched to rollcarts as the container of choice for holding recyclables and, for that matter, trash and yardwaste, but Princeton has long been a part of Mercer County's recycling program, which uses these small yellow and green tubs. Despite their flaws, they sometimes seem like they will outlive civilization.

The flaws become apparent any time recycling day coincides with stormy weather. The small, lidless tubs or "buckets" are often overflowing with recyclables, and unstable. Winds tip them over, scattering their contents and causing the containers themselves to roll out into traffic. Many stormdrains have bigger openings than this one, which means that all over Princeton on recycling day, thousands of plastic containers are dropping into the stormdrain system, from which they will enter local waterways and potentially feed the widening gyres of plastic out in the oceans.

As with the feeding of climate change that we do daily, this massive littering is unintentional, and is therefore tolerated. When, as a member of the Princeton Environmental Commission years back, I suggested switching to rollcarts, which are more stable, have wheels, lids and larger capacity, there was a surprising amount of pushback, suggesting that the town and county are tightly bound to a status quo that gives Princetonians little choice but to continue collectively littering streets and waterways for the foreseeable future.